GLYDE condoms are a high quality product of GLYDE Health Pty. Ltd. from Sydney (Australia). They are manufactured and packed in a specially certified factory in Malaysia.

Since 2007, GLYDE condoms are also available in Europe; currently, most important European states have local or regional distributors who supply GLYDE condoms to shops and organisations within their area. GLYDE is always expanding its distributor network, so please feel free to contact us if you are interested in distributing GLYDE condoms in your country.
Outside Europe, our partners in North America, the Middle East, Asia and Australia take care of their respective areas and deliver GLYDE condoms to lots of supermarkets, dealerships, shops and online businesses.

What's the "Vegan" Thing in Our Condoms?

To make a condom you need much more than some latex milk. 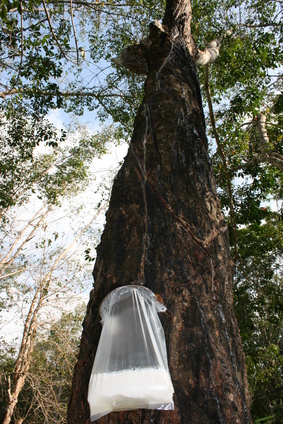 In principle, each and every condom could very well be vegan - because it's made of natural rubber latex, a plant-based substance which is made from a milky fluid harvested off rubber trees. Fortunately, the times when contraceptives were made from animal intestines are nearly over - although there is still one brand of condoms that is still made from lambskin fom New Zealand ("Naturalamb", U.S.A.). Fortunately, these condoms must not be sold inside the E.U., so you can be sure you don't accidentally stumble upon such an ugly thing.

To make condoms from the raw latex milk, various processes are required which in turn consist of several different steps. And it's exactly here where there's a big difference between vegan and non-vegan condoms - because one of the "helping hands" during rubber-making is casein. Of course, there's no residue of that once the condom is ready, but nevertheless - as most manufacturers use it to make the rubber smooth and fine, most condoms cannot be called "vegan" at all, because "vegan" as we understand it does not only refer to the ingredients as such.

Are There Alternatives to Casein?

Of course. Our manufacturer in Malaysia uses a certain thistle extract which does exactly the same as the casein - so we can guarantee a 100% plant basis for our manufacturing process. It is clear, however, that such new developments and changes make the product somewhat more expensive than standard rubbers, but it's the only way to keep the product 100% vegan.

Therefore, GLYDE condoms have for a very long time been the only condoms from all those brands that compete on the overcrowded European condom market that had managed to get the Vegan Flower sign. GLYDE condoms and dams are registered with the Vegan Society (Reg.No. #019955) since 2006.